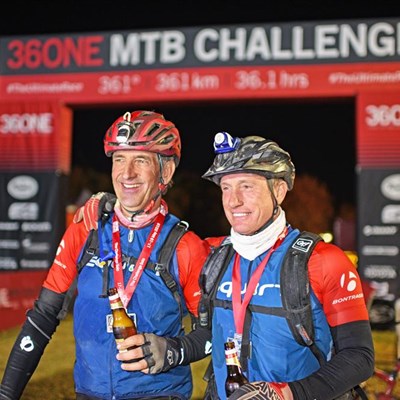 The 60-year-old Drew, a Knysna resident of two decades, had his world turned upside-down in 2016 when he lost his leg in a motorcycle accident, but he refused to let that stop him from feeding his love for cycling.

“When I lost my leg, I was told that maintaining my fitness and controlling my weight was key to my rehabilitation,” Drew said. “Five weeks after amputation my friends had me training in a cycling studio and three months later when I was fitted with a prosthetic, I found that cycling seemed less demanding on my body than walking so I set out to perfect it.”

Drew wouldn’t pick a measly little cycle race as his first challenge, however, as he set his eyes on the 361km-long 36One MTB Challenge, and looked to become the first above-the-knee amputee to attempt a long-distance mountain bike race. The time finally came on 17 May to take part in the single-stage race, and he had 36.1 hours to break new ground for amputees.

“It was tougher than anticipated but I again cycled with Jeffrey Wilcocks who understands me so well,” Drew explained. “It was very mentally challenging but we took it one step at a time and always remained positive.”

Drew managed to complete the race in 28 hours and 29 minutes, well within the 36.1-hour time limit set out in the race rules. “The relentless climbs are harder than the distance. With over 5 300m of climbing we knew this would be a challenge, but I was not prepared for the steep gradients of many of these climbs,” Drew said. “I can’t stand and pedal nor can I walk – so when I start a climb I have no option but to continue until I get to the top.”

While Drew is well aware of the work he’s put in as an individual, he isn’t blind to the help he received. “I have had so many positive people helping, motivating and encouraging me throughout this journey. When I crossed that finish line it was not only a victory for me but a victory for them.”

He isn’t done yet, and already has his eyes set on the 7Weekspoort MTB Challenge coming in October.